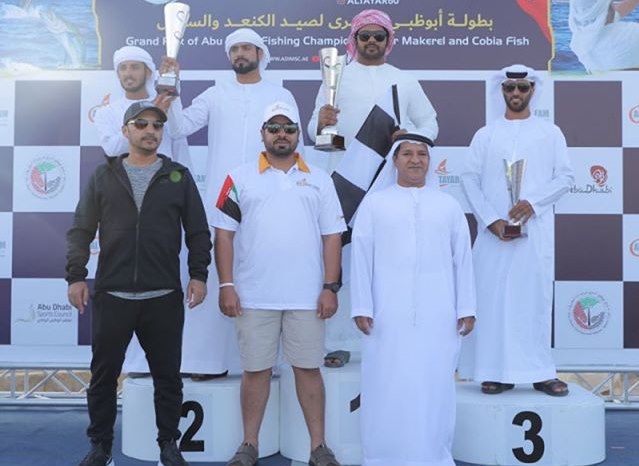 Al-Marzouki, Al-Kanad and Ibrahem are the first team at the end of the Abu Dhabi Fishing Championship

The second round of the Abu Dhabi Grand Prix for Al-Kanad and Al-Sahel was a great success on the final day of the championship, organized by the Abu Dhabi International Marine Sports Club on the breakwater in Abu Dhabi, with a large participation of 180 boats and boats in this version, and won the title of the heaviest fish in the category Alknaz Abdul Fattah Al-Marzouki with a weight of 25.52 kg while Khalid Khalfan Al-Rumaithi finished with a weight of 25.50 kg. The difference between the two is only a few grams.

The third place was Juma Mohammed Abdullah Boseen (25.16 kg). It was only 1 gram from the first place, while Ibrahim Mohammed Al Marzouki was ranked 35.56 kg in second place. Khaled Saleh Obaid scored 26.32 kg. Abdullah Butti Al Qubaisi with a weight of 23.22 kg.
The winners were Salem Al Rumaithi, General Manager of Abu Dhabi International Marine Sports Club, Hazza Mohammed Bin Rabeeh Al Muhairi, Chairman of Al Tayyar Group, Sponsor of the Event and Championship, and Abdul Salam Firooz, Marketing Advisor at the Club.
Salem Al Rumaithi congratulated all the winners in the first places, and all the participants in the second round of the tournament. He stressed that the competition was held in the best and best atmosphere, especially that the days of the race were accompanied by an ideal atmosphere for fishing. "It was a good fishing experience, especially with the weights and fish that everyone brought throughout the days of the competition. The delivery was allowed at any time during the three days for all, and there was a good way of coming in and recording the different weights for all sailors and fishermen."
Hazaa Mohammed bin Rabee Al Muhairi expressed the great pleasure to see the turnout and attendance in the fishing competitions of all sailors and snorkels. He stressed that the beautiful youthful atmosphere enjoyed by all in the tournament presented the important position that this sport occupies in the hearts of UAE nationals. «What we have seen from the turnout and participation in the fishing competitions reveals to us the great place occupied by this tournament in the hearts of everyone, and they feel it is a passion to be a continuation of this tournament and fishing tours».