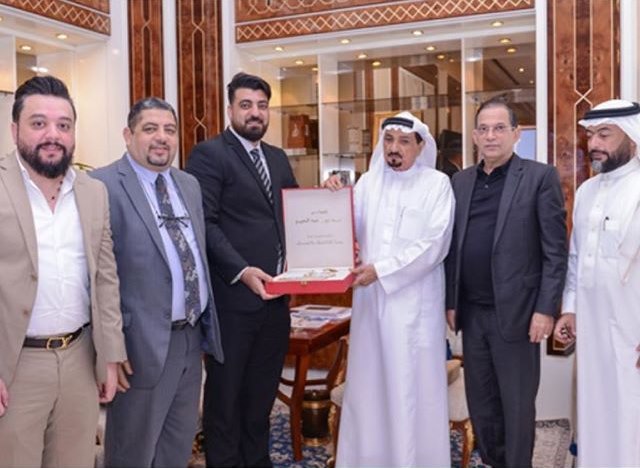 Al-Naimi: Support for the UAE team is not strange to Mesopotamia.

HH Sheikh Humaid bin Rashid Al Nuaimi, member of the Supreme Council and Ruler of Ajman, received at the Ruler's Court yesterday the delegation of "Al Wafa Campaign to Encourage the Children of Zayed" from the Iraqi community, which played an active role in mobilizing the masses of the community to stand behind the UAE team. Currently in the state.

The delegation included Os Akram Yahya al-Samarrai, representative of the Iraqi community, Basem Salman al-Fadhli, director of Al-Iraqiya channel, Ali Sahib Mahmoud al-Obeidi, Omar Salman Ali al-Ithawi, Abdul Karim Ezzeddin Mahmoud al-Rawi, Baker Taha Hussein and Omar Zuhair al-Hafiz.
The delegation stressed that the campaign will continue until the end of the tournament and will be allocated buses to transport the Iraqi masses to the remaining games to encourage the UAE team.
His Highness the Ruler of Ajman thanked all the Iraqi people for their stand and encouragement for the team, stressing that the leadership and the people of the UAE welcome the Iraqi community in their second country. He said that the two countries have friendly relations and love and that their standing alongside the UAE team is not strange to Mesopotamia.
At the conclusion of the meeting, HH the Amir honored the president and members of the delegation.
The meeting was attended by Sheikh Majid bin Saeed Al Nuaimi, Chief of the Ruler's Court, Sheikh Mohammed bin Ali Al Nuaimi, Head of Justice Departments in Ajman, Hamad Rashid Al Nuaimi, Director of the Court, Abdullah Amin Al-Shurafa, Counselor at the Ruler's Court, Salem Saif Al Matrooshi, Deputy Director of the Chamber and Hamad Bin Galita. Federal National Bank and Yousef Mohammed Al Nuaimi, Director General of Protocol and Hospitality and a number of officials.